PHOTON 2019  -  International Conference on the Structure and the Interactions of the Photon. Satellite Workshop: Photon Physics and Simulation at Hadron Colliders. 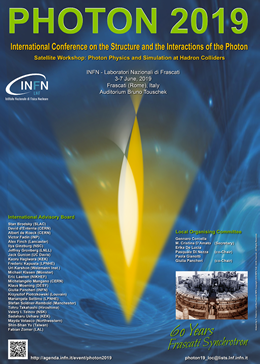 This conference is part of the series initiated in 1973 in Paris, as an International Colloquium on Photon-Photon Collisions at Electron-Positron Storage Rings. The latest Photon conferences took place in CERN-Geneva (2017), Novosibirsk (2015), Paris (2013), Spa (2011), Hamburg (2009), Paris (2007), Warsaw (2005), Frascati (2003), Ascona (2001), Freiburg (2000), Ambleside (1999), and Egmond aan Zee (1997).
This year edition will feature a two-day workshop on Photon Physics and Simulation at Hadron Colliders, focused on photon phenomenology at the LHC, on June 6-7.
More info on this workshop can be found at:
https://indico.cern.ch/event/783361/
The conference scientific program will include topics related to photon-photon and photon-hadron collisions as well as final-state photon production at current and future colliders. In addition, high-energy astrophysics gamma-rays, and photon-related searches of new physics (axions, dark/hidden photons, ...) will also be discussed. The conference format consists of talks in plenary sessions only. The LOC offers a number of young researcher grants to attend the conference. Interested participants are invited to send an e-mail to photon19_loc@lists.lnf.infn.it with their motivated request for support.

The 2019 Edition of the Colloquium will be hosted in the first established laboratory of the Italian National Institute of Nuclear Physics (awarded also as EPS historical site) the place where in 1959, exactly 60 years ago, the first Italian Electro-Syncroton started its operations. Here, the year after, the first matter-antimatter collider (AdA) ever built saw the light.