The workshop will be taking place at the Galileo Galilei Institute for Theoretical Physics in Arcetri (Florence). 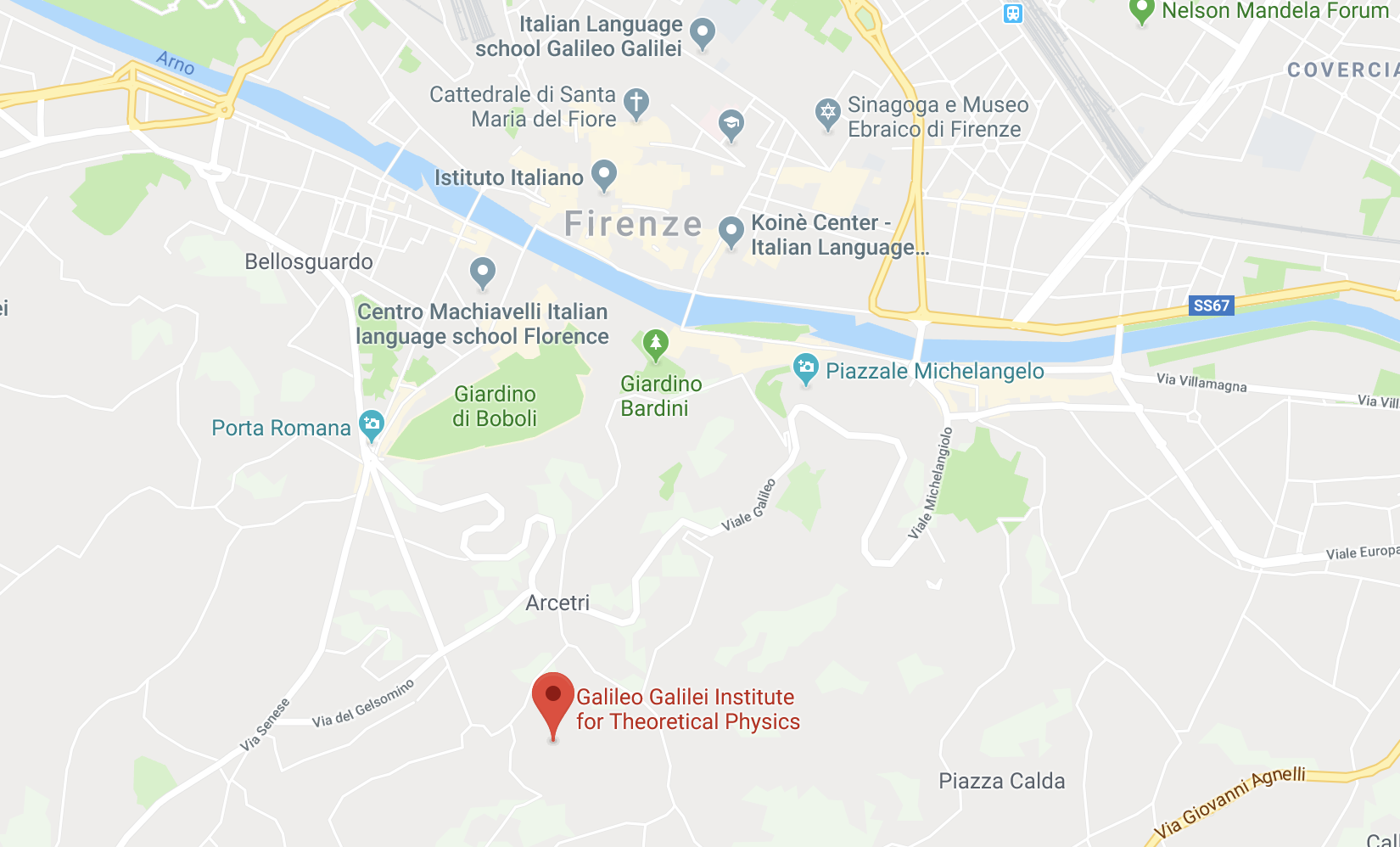 From the A1 higway (Autostrada del sole) exit at: Firenze Impruneta.

Follow directions for downtown Firenze for about 3 Kilometers up to the crossroad pointed to by an arrow in the city map (It is the fourth crosslight). Turn right along V.le del Poggio Imperiale and then left. In 200 meters you'll be in front of the entrance gate; then proceed a little by car until the Dipartimento, the first building at the top of a flight of steps. Once inside you will find the indications for the Institute.

Get off at Firenze S.Maria Novella railway station. Then the easiest way is by taxi (around 15 minutes in normal traffic conditions).  The fair from the train station to the GGI is approximately 20€.

If you want to go by bus you can take the bus number 11, bus stop name: "Stazione Scalette", in Piazza della Stazione. Then get off from the bus at the first stop in Via del Gelsomino from where you have to walk in Viale di Poggio Imperiale to the main gate in Largo Enrico Fermi, 2 (around 10 minutes or 800m). See this map for the detailed route.

From the main gate to the Institute you have to walk for a little until the top of the steps. Once inside you will find the indications for the Institute

The Amerigo Vespucci airport in Firenze is connected with many European and Italian main cities, and with the two italian intercontinental airports (Roma and Milano).

From the airport you may take a taxi to downtown (20 min.) or to the Galileo Galilei Institute in Arcetri (30 min.). The fair from the airport to downtown is approximately 20€. Otherways you can get the direct tram to the S. Maria Novella railway station. And follow the directions given above.

The Galileo Galilei airport in Pisa is also well connected with European and Italian main cities and with the intercontinental airports in Roma and Milano.

From Pisa airport a direct train connection will bring you to the Firenze S. Maria Novella railway station in about one hour.

From Bologna-Marconi airport you can get a bus shuttle to the Bologna Centrale railway station from where you'll get to Firenze S. Maria Novella in about one hour.

From the Roma L. da Vinci airport you can reach by train the "Roma Centrale" railway station from where you can reach Firenze S. Maria Novella in less than two hours by a fast train.

From Milano-Malpensa airport you can take a shuttle train which brings you to the "Porta Garibaldi" railway station in Milano. Unfortunately no connections to Firenze are available in this station; you must reach the "Milano Centrale" station by undergrund (a few minutes) from where you can take a "FrecciaRossa" fast train to Firenze (about 2 hours). Alternatively from the airport you can use a bus shuttle which reaches directly the "Milano Centrale" station, but the minimum travel time is 1 hour and can be quite worse in heavy traffic conditions.